Does Your Marketing Department Know About The Bag Ban Movement?

Does Your Marketing Department Know About The Bag Ban Movement? 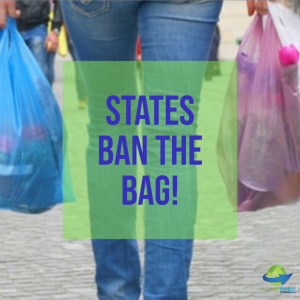 The bag ban movement began over a decade ago and has continued to grow as more people want to reduce the negative impact of single-use plastic bags. This movement has created an exciting opportunity for brands, businesses and organizations to market with reusable bags. Our daughter brand, Factory Direct Promos, is a leading manufacturer of reusable bags and eco-friendly promotional items and they are very familiar with efforts to ban single-use plastic bags.

For a number of years, they have maintained a map following the bag ban movement. Since they are so tuned into the movement, Factory Direct Promos noticed a trend of states banning single-use plastic bags. This lead to their series, States Ban The Bag.

The bag ban movement got underway in San Francisco in 2007. Almost immediately, cities, towns, and counties throughout California began passing their own bans. The movement spread outside of the Golden State as cities in other states began to pass bag bans. California again set an example when they became the first state to ban single-use plastic bags in 2016. To date, six states have followed California’s lead and passed their own bag bans and several more states are working towards passing state-wide bans.

States Ban the Bag will be an ongoing series that looks at the efforts to ban plastic bags at the state level. Each ban has the same goal: to reduce the negative impact of single-use plastic bags. However, the way each ban comes to be and the details are always different. And each ban is a reminder that creating custom reusable bags is a marketing opportunity that should not be missed. In fact, research from the Advertising Specialty Insititute shows that giving your customers and prospects something they need and will use such as a reusable bag, will make them more likely to do business with you.

Factory Direct Promos looks at each ban and tells the story of what inspired the ban and how the ban came about. Check out the first post in the States Ban the Bag series to learn more!

This site uses Akismet to reduce spam. Learn how your comment data is processed.